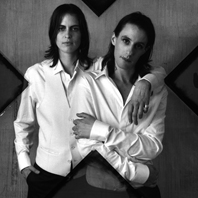 Booking agency, record labels….Kill the Dj is also about going beyond the borders of electronic music, great underground artists, popular parties for sure  but also a vision and an attitude, questions and answers with  Fan & Chicks

1/ How do you start a record label in France ?

Oh la la !  First you start a record label to have a cool project with your mates, then to release tracks from thrilling artists  that are your mates, to work on their development, to be independent, to have a tool- to express yourself and to be able to defend these artists, to be free, things like that !

2/ How do you pick up a name for a record label, who are the founders of KTDJ, did other people join the team later on ?

The name we chose at 6 in the morning, after a long sweaty night !, the founders : Stéphanie Fichard / Fany Corral + Ivan Smagghe + Chloé . 3 and half Dykes who have swept their shoes on the Pulp Club dancefloor, those who joined later were artists that we met on the way….

3/ Who were your first signatures and why?

Our first signature was a co-signature with record label Tigersushi, we made two compilations, one was mixed by Ivan Smagghe and the second one by Optimo.

Ivan  was an obvious fact, he was our parties’s resident at the Pulp club and we‘ve always trusted him ; same for Chloé or even Jennifer who is part of the gang…Optimo was more of an encounter, we booked him on one of our nights in 2003 and felt close immediately, we made up our mind for the compilation in 2 seconds and we just did dit !

4/ Did you ever think that your work was…educational ?

Battant’s next album due to come out next September

Many other things and never have enough time..

7/ How would you define the label’s directions, if any, and here I’m not talking about sexual definitions..

We try not to have directions, to remain as open as possible…

Let’s say we have an inclination for dark and romantic things, shaky, rickety stuff…we love people who are undisciplined, those who refuse the establishment in their behaviour (be it artistic, political, social or…sexual), and more generally the kind of tune one can’t remember

The one that will come out tomorrow..

10 / Why doing all this knowing the the music business current situation ?

Because we don’t want to stop, because it’s worth it, and because knowing the ‘situation’ we shouldn’t shut the f… up… ! 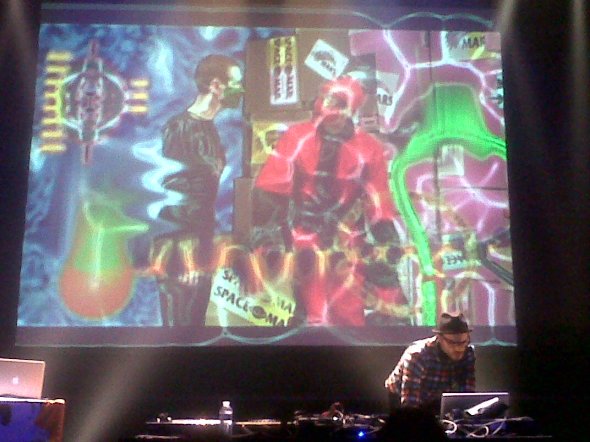 In the middle of the 1970’s, graphic designer and collective Kiki Picasso are part of the Punk movement throughout their drawings and collaborations with daily newspaper Liberation and magazines such as l’Echo des Savannes-Actuel-and Hara-kiri all part french underground press. An exhibition at the 104 was introducing Kiki’s work who created the visuals for this OUF party.A disco-punk night it was !, with artist such as James Chance and the Contorsions, Lydia Lunch and good Djs who entertained the audience with no wave classics. Special mention to Dj Producer Joakim who actuallly played all the anthems of the times-including an excellent remix of Shack up -followed by a good set by  SAl Principato. from Liquid Liquid including vocal performances – I guess the Kloud Chamber was probably the only person who wasn’t fancy dressed that night-for it seemed like a 80’s fashion show. The audience mainly consisting in a cool gay& lesbian crowd (plus a selection of rather kinky heterosexuals) all acting as if they were in a We own the night remake. Anyhow, the party was alive and kicking thanks to the visuals and a lush dancefloor energy- Revival, revival…

Best time : The hot tub bath after Joakim’s set and an eclectic audience. 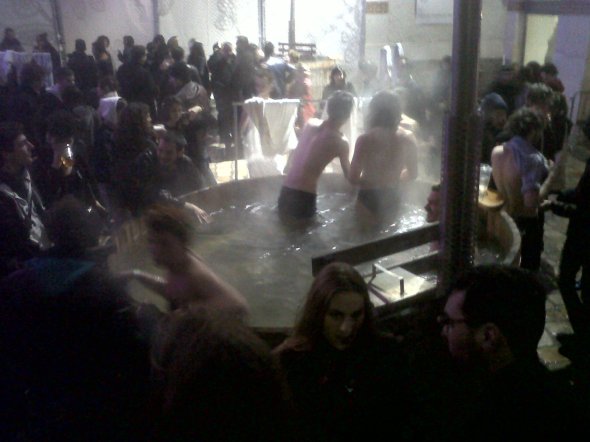